A sales attendant learns what his next customer values, and what he values as well. 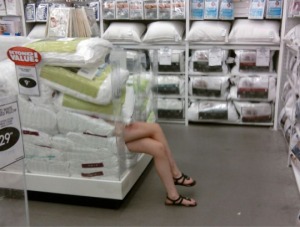 Incredibly attractive legs stunned the handsome clerk as much as where those legs chose to rest that sultry day, in a very secluded part of the store, atop the merchandise he was tasked with selling.

“Uh….miss…can I help you with something?”

Behind the ad paper she was reading, eying the clerk carefully, thinking the manager had sent him to help her.

“Maybe,” she spoke with a smile. “…I’m fishing for something.”

The clerk tipped his head away to look at one of the store’s ads, smirking at her choice of words.

“Well, we’ve got lots of new things on sale today, including those pillows you’re on. They’re pretty soft and…and uh…” he tried to find a good word to politely describe how she was putting undue pressure on the pillows she rested on, realizing too late that he was starring at her legs more than the pillows while failing at his attempt at words. It seemed to make the woman giggle lightly, joyously.

“Yeah, I’ll probably get a few today. But I had something else in mind today.”

“What’s that? Bath towels? The new mats or carpets? Something else for your bedroom?”

He liked the way she lowered her black sunglasses to show her sparkling eyes at his last question, inviting him to share a look with her. Replaying the words of his common sales inquisition, delivered with noticeable, unconscious zeal borne of reactive attraction, it surprised him her look wasn’t chastising for the comment that seemed much less innocuous hearing it in his head the second time; her reaction made him smile a small, unbidden smile.

Her eyes eventually went back to scanning the paper, speaking to him without looking at him.

“I like the sound of those too, but I had more of a definition in mind.”

He seriously wondered what needed defining; the products they sold always seemed to speak for themselves, and he never got any conceptual complaints about any of their sales.

“Better than your average value,” he surprised himself with such a diplomatic, automatic answer.

“Not quite what I meant. What’s beyond the word ‘value?'”

“Such as? Give this some real thought if you can.” She spoke while her eyes were down at the paper and his had wandered down to the rotating sandaled foot, circling by its ankle.

He was yet wasn’t aware of that question because she’d spoken it lightly, borderline imperceptibly to distracted senses. He was too busy noticing the jeweled decoration atop her sandals, and the foot’s graceful measured swinging, and the smooth transition between that foot crossed slowing to a crawl while the foot against the floor made light tapping noises.

It took the same amount of grace to make a sound almost lighter than his steady breathing with every tap; he felt he could measure his heartbeat to that slow tapping, more encompassed by how beautiful that foot looked motioning up and down. It was insistent tapping, but not impatient. He’d never seen foot-tapping that took its time like that, that tapped just because. Eventually that soft tapping slowed to a stop as the other foot began rotating again, albeit somehow slower than before. In the middle of all this, a question earlier from the leg’s owners hung in the air.

This mouth didn’t have an answer, partly because his ears could barely tell if she’d spoken again of if that was an echo from within his own head. Small comfirmation in what he thought he heard proved that she’d spoken the same phrase again, this time with emphasis on the word ‘value.’ The way it was spoken, elegantly-stressed, thick with meaning, it enhanced the entire repeated phase, to the point where he wouldn’t have minded it repeated again. Besides that, his ears were clearly aware of his comfortable breathing, and swearing he could hear the gentle sound her foot made against the sandal, and his eyes were sure of the balming femininity of the lovely alabaster skin the sandal was strapped to.

“What…feels…like beyond value to you?”

His silent hopes of hearing the emphasis were granted yet again, but this time a different word was stressed, eliciting more feeling of something pleasant resonating inside him. Just as much as she empowered ‘value,’ ‘feels’ sounded equally wonderful, the word by itself symbolically giving him an excuse to suggestively feel more, and be dimly aware of the state he was being led further into.

The newly-emphasized word was delivered with such passion, soothsayed all the way from her lips to his, past his ears, deposited into a stream of pleasure running through his body, the meaning of beyond to his senses widened that stream, made him feel it stronger, the value of her repeated question drowning out everything else around him.

Whichever thoughts that weren’t totally fixated on her body, fixated on the words that pressed themselves deeper into him, importance of the words no longer limited to only parts of him. ‘Feels,’ ‘beyond,’ and ‘value’ deeply punctuated to him as he found an answer to her near rhetorical question that finally felt right – to listen and embody the words.

The composition of the repeated words no longer resembled a question, taking on nearly a more suggestive, confident, commanding status. Each time she lent more power, allure, and joy to one of the words her sweet, persuasive voice, laced with a deserved dash of sass to show the infectious surety she had in her spoken words. Sometimes it was just one word, or a combination, until eventually all of them felt above all other words, beacons for his mind to follow unquestionably.

Eventually that rotating foot barely moved to his eyes, yet somehow still spun. The tapping slowed its own pace, but the echo persevered in the recesses of the clerk’s head. He grew more and more tired, but he never tired of looking and listening. The enchanting legs had done their job well as always when utilized, creating a subtle phenomenom that left whatever defenses could be established left by the wayside. They turned like the mechanized gears of a drawbrdige, opening the bridge to his mind, letting this woman’s words walk in and seize the castle with no resistance met.

His eyes somehow moved up her leg to see a hand as beautiful as her legs caress her knee. He was so grateful to see that hand use a finger to point down, grateful to be closer to the ground, closer than he could’ve dreamed of being to those feet. Those feet that became his world now shimmered like jewels, like his glassy eyes, each curve like a lit facet. His mouth parted with a desire he couldn’t explain.

Like the jewel that gently shimmered in his eyes, he noticed that another new word had been emphasized, and that he had his internal attention piqued, that the deepening part of him was being mentioned, shone to have value.

The imprinted question was white noise to his ears, but the statements she was making all involved him, allowing that relaxing surge flowing in him to feel more special as if he was meant to feel more, to be valued more, to be beyond whatever he already was. His hypnotized self-worth felt branded into his consciousness, knowing on his knees that he was worth so much to this incredible woman above him, who seemed nothing but happy with him. He noticed her leg extending towards him, placing itself in his light grasp; she smiled down at him, giving silent permission to express himself humbly, blessed enough to have his lips make contact with the top of her rotating foot.

As she expected, the customer is always right was elevated in meaning because this customer was so right. That day proved a perfect day to go shopping, and to continue to exercise her fairly new word-emphasizing technique she had yet to give a name. She was sure there was some kindof terminology to attach to it, but found much more value in using and experimenting with it on her own terms.

A new city meant meant new opportunities, but also the pains of re-establishing a network of comfort. She chose to look on the bright side of things, since new opportunities also meant new connections to make. Bed Bath and Beyond was a necessary shop no matter where she lived, so it would’ve behooved her to make nice with the staff there. The manager seemed very ‘accommodating’ after a more than brief word with him, even agreeing to send his most handsome clerk to assist her, cause this store always hired some of the finest hunks in her opinion. When she first set eyes on the clerk now kissing her feet, she agreed the manager had served her well; he would receive a swimming customer review, after he would grant her the employee discount when he paid for her purchases.

She could already tell her clerk/boy-toy would get an even better review, for his store assistance, and his residential/bedroom service to come. Something about the gentle attention he gave that she didn’t even have to suggest meant she might have trouble not excusing themselves to the bathroom, and how many pairs of extra sheets she might need. She felt the dopey smile against her skin, loving the answer he didn’t even know he’d given yet –